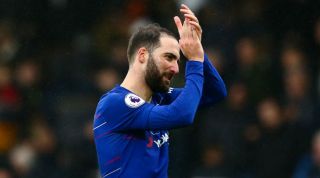 According to Gazetta dello Sport, Juventus were hoping that Chelsea would take Higuain off their hands this summer.

However, the Argentine's poor form and fitness struggles have left the Blues less than impressed.

Higuain has scored three goals in nine Premier League starts for the west Londoners this season.

Unless they can find a buyer, Juventus now face the prospect of a 31-year-old, out-of-form striker sitting on huge wages for the two years remaining on his contract.

Chelsea will be short of strikers if their transfer ban is upheld - which is already regarded as a problem area at Stamford Bridge.

Olivier Giroud may see an opportunity for more first-team action, but the Frenchman has been outspoken about his frustrations and mentioned the probability of leaving this summer.

Why England's shiny, self-aware new Golden Generation have everyone over a barrel – and we should love them for it