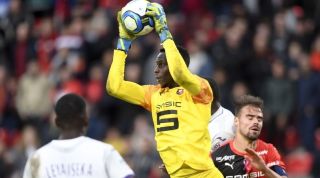 The president of Rennes has confirmed that Chelsea are in talks to sign goalkeeper Edouard Mendy, who is keen to join the Premier League side.

The Blues have already splashed out more than £200 million on transfers this summer, but still hope to resolve their goalkeeping issue with the addition of the Senegal international.

Chelsea are willing to spend as much as £25m on the 28-year-old, according to Goal, having previously failed with a bid of £18m.

Premier League preview: Are Chelsea ready to challenge for the title?

And Rennes president Nicolas Holveck confirmed that Mendy was seeking a departure during a media conference on Wednesday.

“Discussions have started with Chelsea for Edouard Mendy," he said.

"I can understand his desire, he told us. But for the moment, there is no agreement and for a transfer, we need an agreement of the three parties."

Goalkeeper was a problem position for Frank Lampard last season due to the poor form of Kepa Arrizabalaga and the advancing years of his deputy Willy Caballero, who turns 39 later this month.

Mendy has been identified as the top target between the sticks after keeping nine clean sheets in 24 Ligue 1 appearances during the 2019/20 campaign, which was called off early due to the coronavirus crisis.

The former Reims stopper has spent his entire club career in French football and has won seven caps for Senegal.

Chelsea hope to get a deal done in time for their Premier League opener at Brighton on Monday night, but discussions haven’t been easy,

Mendy still has three years remaining on his contract, having only arrived at Rennes last summer in a deal worth around £3.5m.