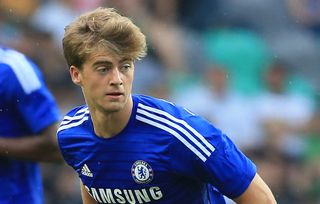 The England Under-21 forward spent the second half of last season on loan at Derby County, scoring eight goals in 14 starts and nine substitute appearances.

Prior to that temporary stint away from Stamford Bridge, Bamford - who joined Chelsea from Nottingham Forest in 2012 - had enjoyed productive periods as a loanee at MK Dons.

And the 20-year-old will now get the opportunity to gain further first-team experience with Aitor Karanka's Middlesbrough.

"It's taken a while but I'm glad to finally be here," Bamford told Middlesbrough's official website.

"I had a chat with Aitor about 10 days ago, but there was a hold up in the paperwork after I'd decided it was Middlesbrough that I wanted to go to.

"It seemed to take forever to go through but then it was just a case of getting up here for the game [against Reading] on Saturday.

"Middlesbrough jumped out at me when I spoke to the manager and heard his aspirations. When he put forward to me what he was looking to achieve I was eager to come here and play."