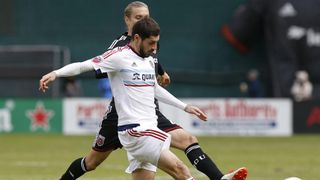 The Chicago Fire announced a pair of transactions Saturday, bringing back midfielder Razvan Cocis and bringing in midfielder/defender João Meira, formerly of Os Belenenses of the Portuguese top flight.

The 32-year-old Razvan has been with the Fire since the summer of 2014. The Romanian international has registered two goals in MLS play over that span.

Meira has been with Belenenses since the 2012-13 season, when the club was in the Portuguese second division. The 28-year-old had been out of contract since the end of the 2014-15 season, after making 16 appearances for the club during that campaign.

“From our initial planning, we wanted to have Razvan back and are glad that we could finalize his return,” said Fire general manager Nelson Rodriguez on the team's official website. “João is an excellent complement to our existing group with experience as both a center back and, if needed, as a central midfielder.”

The Fire, which at the bottom of MLS, kicks off their MLS season on Mar.6 against New York City FC.