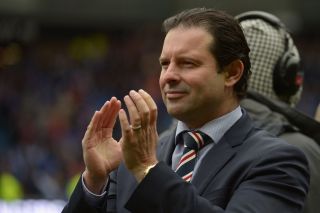 After former director Paul Murray's successful courtroom bid to postpone the Scottish League One side's AGM earlier this week, Mather, who assumed the role following the departure of Charles Green in April, cited "incessant attempts to destabilise the operations of the club" among his reasons for leaving.

In a statement, Mather said he hoped his departure would help calm speculation over the governance of the club.

"The interests of the Club are of paramount importance and I believe these are best served by me leaving the club," he said.

"I had real faith in the rebuilding of Rangers and invested significantly in the club. Sadly, those who have been most active in upsetting the very good progress we have been making were not willing to do the same.

"I leave with my head held high and will remain as a shareholder and a supporter of Ally (McCoist, Rangers manager) and his team.

"I would also like to pay tribute to the outstanding commitment and loyalty of Rangers supporters.

"No individual is more important than Rangers and my departure will hopefully alleviate some of the pressure surrounding the club and herald an end to the current hysteria, which I believe most fans desperately want to see.

"I am certain that once the board is settled Rangers will be restored to the top of Scottish football."