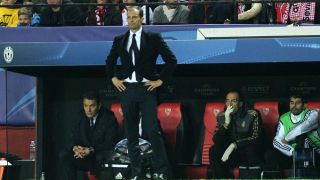 Juventus defender Giorgio Chiellini hopes his side will receive a a favourable draw in the last 16 of the Champions League after a 1-0 defeat to Sevilla denied them top spot in Group D.

Fernando Llorente was on hand to haunt his former club with a well-taken second-half header, while Manchester City's win over Borussia Monchengladbach ensured last year's finalists were knocked off their perch at the top.

And Chiellini, well aware of the potential ramifications of finishing second in the group, was left to ponder a disappointing night for his team, insisting they were unlucky to emerge with their first defeat of their European campaign.

"Considering how many chances we created I don't think we deserved to lose this game," he said.

"I think a draw would have been even too little for us. Let's hope for a good draw now.

"I hope we will not regret this game in March. I think we played a very good game but we did not manage to put the ball in and we were punished.

"That's football and we have to accept it."

Those thoughts were echoed by boss Masimiliano Allegri, who called on his side to turn their focus to the upcoming Serie A clash with Fiorentina on Sunday.

Allegri told reporters: "We needed a result tonight, but if you create chances and don't put them away, you also run the risk of conceding.

"Now we must focus on Serie A because we've got a tough game on the horizon against Fiorentina."