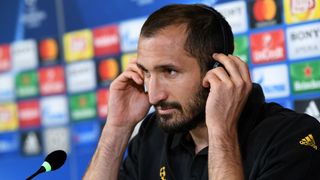 Giorgio Chiellini feels Juventus have improved in the two years since their Champions League final defeat, but he remains wary of the threat holders Real Madrid pose.

Juve were beaten 3-1 by Barcelona in the 2015 showpiece, with Chiellini missing out through injury as his side were outclassed in Berlin.

However, the Bianconeri knocked Barca out at the quarter-final stage of this season's competition and the experienced centre-back is optimistic of their chances in Cardiff, despite Madrid's class.

"Our start to the match will be crucial," Chiellini told a news conference. "We have to be organised – that's essential in a one-off game and it gives you the best chance of reading the play.

"We meet a team that have won this trophy twice in the last three years. They're even more dangerous, because just when you think you've got the game by the scruff of the neck, they strike.

"We feel we've improved in the last two years and the squad has got better, but the key to everything will be our willingness to go the extra yard.

"In a Champions League final you have to do your basics well but also be able to go above and beyond."

Chiellini thinks Juve have learnt from the 2015 defeat, where he attributed their disappointing display to a nervy first half.

"We'll use our experience from Berlin two years ago in the build-up to this final," he said. "This is our second final in three years and that definitely means something.

"We'll stay calm this week. We were too tense at the start of the 2015 final and we conceded in the first half. Even when we got back into the match they responded because we were too exposed defensively.

"We don't want to make the same mistakes twice, though I tend to take the positives from past experiences, even unhappy ones."