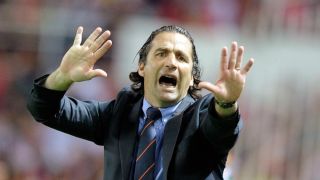 Argentine Pizzi, 47, will begin his reign from next week after replacing the recently departed Jorge Sampaoli.

Pizzi agreed a deal which will keep him in the post with the Copa America champions until the end of the 2018 World Cup.

A statement on Chile’s official website read: "The Board of the National Association of Professional Football (ANFP) established an agreement with Juan Antonio Pizzi to assume the post of Technical Director of the Chile national football team, starting next week."

President of the ANFP Arturo Salah added: "We are very pleased with the arrival of Juan Antonio Pizzi. A professional who gives us a lot of confidence, has an established career, has been a champion in Chile and Argentina, in addition to good campaigns in Europe and Mexico.

"Pizzi is the right person to protect and continue the work of the Chilean national team, while maintaining the competitiveness shown in recent years."

Pizzi will become the fourth-consecutive Argentine to take control of the Chile national team, following in the footsteps of Marcelo Bielsa, Claudio Borghi and Sampaoli.

The new coach will also be in charge of the nation’s 2016 Copa America exploits, as well as the 2017 Confederation Cup in Russia in preparation for the World Cup.

Pizzi managed Liga MX club Leon for three years before the appointment and also spent one year in La Liga with Valencia for the 2013-14 campaign.