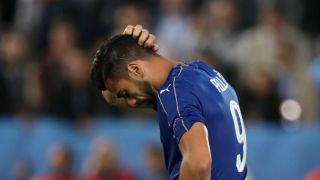 New Italy coach Giampiero Ventura has warned Graziano Pelle that his move to the Chinese Super League could cost him his spot in the national team.

Pelle left Southampton for Shandong Luneng after helping the Azzurri to Euro 2016's quarter-finals, reportedly becoming one of the best paid players in world football as a result.

A key figure under Antonio Conte, Pelle was Italy's top scorer in qualifying for the European Championship with three goals, while two further strikes sealed impressive 2-0 successes against Belgium and Spain at the tournament.

His tournament ended in ignominy, however, scuffing a penalty wide as Italy were beaten in a shoot-out by Germany.

"Players need to have a desire to win, going to a lesser league doesn't help in that regard," Ventura said as he was presented to media on Tuesday.

"So 50 per cent is China, the rest is the big wages. A player has to be strong psychologically and temperamentally.

"When [Alessandro] Diamanti went to China he lost the national team, despite his quality. The 23 who went to the Euros deserve to make their case because of what they did there. Then there will be many others, because football moves on.

"Pelle, missed penalty aside, had a good Euros. Let's see."

Ventura was quick to hail Conte for providing him with solid foundations, with the new Chelsea boss having confounded expectations at the tournament as Italy topped their group and knocked out the double-defending champions Spain utilising a classic Italian 3-5-2 system.

"Any style of play, if done right, will pay dividends," Ventura added. "If it's done wrong, it won't.

"When you want to get a result you can't rely on individuality or chance - you all have to push in the same direction.

"Conte's football worked for a particular time, the players on the bench when [Marcello] Lippi won the World Cup were great names, the ones who went to the Euros still have to work to reach that level.

"Conte's style was important to get results, but we'll work to improve."