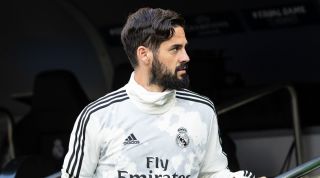 The Denmark international will become a free agent next summer and appears to have no intention of extending his stay in north London.

He was heavily linked with a move to Madrid earlier this year, but the La Liga giants decided to focus on other targets.

Eriksen’s contractual situation means he is likely to be available for a reduced fee when the transfer window reopens in January.

However, AS write that Madrid president Florentino Perez has decided to wait until next summer before attempting to land the former Ajax schemer, who will be able to sign a pre-contract agreement with foreign clubs in the New Year.

The Spanish side will not make any new acquisitions in the mid-season market, but they could sell some fringe members of the squad in a bid to trim the wage bill.

Mariano Diaz and Brahim Diaz have both been linked with an exit, although neither is likely to depart in January.

Isco, though, may seek pastures new having failed to nail down a regular first-team spot under Zinedine Zidane this term.

The Spain international has started just two La Liga games in 2019/20, and is yet to play a single minute in the Champions League.

Manchester City and Arsenal are thought to be monitoring the situation closely, with both Premier League clubs considering a January swoop for the former Malaga man.

City came close to acquiring Isco back in 2013, but the playmaker opted to join Madrid instead.

He has won four Champions Leagues, one La Liga title and one Copa del Rey during his time at the Santiago Bernabeu, but he is reportedly ready to leave in search of a starting spot elsewhere.

And Isco’s desire to play week in, week out ahead of Euro 2020 could help either City or Arsenal to buy the 27-year-old in January.