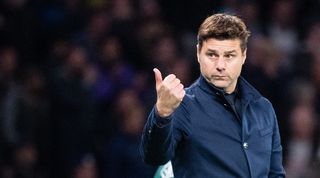 In the end, Mauricio Pochettino will decide his own future at Tottenham. Daniel Levy may have the final say over his employment, but Pochettino’s situation will be determined by whether he actually wants to remain in north London.

It’s the general theme, actually, with Spurs continuing to be drained by their muddled focus. There are other problems at work, clearly, and general fatigue and shortages in key positions are hardly irrelevant, but nothing is as obstructive as the creeping apathy.

It is apathy, too. The shared trait among all the players who have expressed a desire to leave – or who are refusing the opportunity to extend their stay – is the tendency now to play as if their reputations no longer really matters to them.

To give this scenario a real-world context, these are players effectively serving a notice period. They’re turning up to work at 10am in the morning, taking an extra 20 minutes for lunch every day, and spending office hours aimlessly rolling around social media. It’s not egregious behaviour, but neither is it productive. In football, just as in any normal enterprise, the sooner the workforce is all focused on the same aims again, the better.

So that’s not a complicated project, but it will be a challenging one. In the beginning, exchanging old parts for new will involve a downgrade at Tottenham. While it’s possible to find replacements for some of those incumbent players – Lo Celso for Eriksen, Sessegnon for Rose, Anyone for Aurier – the result likely wouldn’t be immediately reassuring.

In fact, it would probably resemble Pochettino’s first few months at the club. The team’s base level would be higher – there’s far more talent at Spurs these days – but it would involve defaulting back to the beginning of the process. A new defence, a new midfield; that’s a lot of new combinations to develop. A lot of hours needed on the training pitches and in the video analysis rooms, probably some trial and error on the pitch too.

It would also be some time before that reinvention produced the kind of results or consistent form that the club’s supporters have got used to over the last five years. There are no quick fixes here; the road back will involve a lot of frustrating afternoons and irritating defeats.

And that’s fine, because Tottenham have been there before and understand that long-term projects can bring wonderful results.

But this is also a process which requires energy, commitment, an almost obsessional dedication. It also demands political resilience, given the size of the personalities being challenged – and because all successful modern sides are slightly cultish, it requires charisma and magnetism from the person in charge.

Pochettino has all those qualities. He’s passed all of these tests before. He’s purged egos, taken on powerful players and won, and he’s also convinced a group of footballers to run faster and harder for longer and further over many years.

But does he want to do that again? At the moment, that’s the only question which really matters and the one which needs answering before anything else happens. Tottenham will have to grind their way back to what they were, and it’s impossible for them to do that if they’re being led by someone who has lost faith in their ability to reach a meaningful destination.

If Pochettino isn’t willing or able to indoctrinate another group and commit himself in the same way, his value as a coach shrinks dramatically. He is not Europe’s best tactician and his in-game management remains strangely inadequate. Strip away his intangible qualities, then, or allow his enthusiasm to drop, and this current situation – characterised by an almost grudging loyalty – seems like a pointless compromise.

He has earned the club’s faith. Absolutely. Over the next week, Spurs might just about beat a fragile Watford before taking what looks likely to be a hiding at Anfield. Neither result should affect his future. But in the background, these conversations need to be taking place for the benefit of everyone involved.

Pochettino cannot be half in and half out. As much loyalty as he’s owed, if his intention now is to manage a chequebook team – a Manchester United or a Real Madrid – then he must leave. If not, if he does believe in this different way of doing things, then he can pick up his axe and get to work.

But there is no third way; those are the only two options.

QUIZ Can you name the 40 oldest clubs in the Football League?