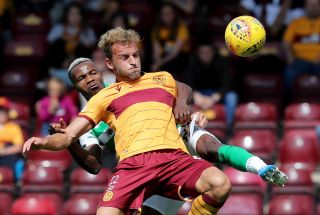 Moving to Motherwell has restored Christian Ilic’s faith in people – but he admits to being slightly daunted when he initially walked into the Fir Park dressing room.

Now the wide player is determined to play his part in the club’s quest for success after settling into life in Scotland and overcoming a hamstring injury.

The Austrian moved from TSV Hartberg to Romanian club Sepsi last summer and signed a contract only for his new club to tell him and others that they could not pay his wages.

Motherwell stepped in and the 23-year-old is loving life in Lanarkshire after making his first appearance for 16 weeks during Wednesday’s 1-0 win at Aberdeen.

“It was a crazy story,” Ilic said. “I signed a contract and they just said they don’t have plans for me and another six players.

“Last summer was something that showed me what football is, but it also showed me that everything goes quick in football. But I am so happy that I am here.

“But I took the risk and I signed for this great club and I am happy.

“You don’t miss your friends too much when you can hang out with these guys.”

“It was not so easy,” he said ahead of Saturday’s Ladbrokes Premiership visit of Hibernian.

“It’s a new country, new people, everything is new, different football. The tempo is faster, there are more crosses, everything is forward. In Austria it was more side to side but here it’s faster and quicker.

“Now I understand players when they say it takes so long when they go to another country or a new club. It’s not so easy but now I feel 100 per cent settled.”

“It was hard but I am a team player, so when I have bad times I don’t show people,” he said.

“I am always positive and I celebrate goals and the wins. I am happy for the boys, we are one team.

“I want to play now I’m fit again. I feel ready, I feel good and I want to stay on the pitch.”

With Christopher Long and Jermaine Hylton struggling to make Saturday’s Fir Park clash, Ilic is likely to be involved again.

Manager Stephen Robinson said: “I think he’s completely different to what we have got.

“He is a very intelligent footballer. The other boys playing in wide berths go one on one and take players on. He comes into little pockets, his movement with and without the ball is very good. He creates different problems, he is left-footed, gives us an option to cut in from the right.

“I think he can get better and better and I am looking for him to really burst on to the scene.”