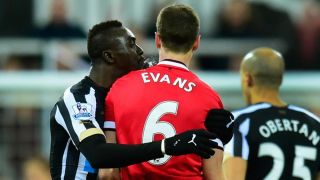 Cisse clashed with Evans during the first half of Newcastle's 1-0 Premier League loss to Louis van Gaal's side at St James' Park on Wednesday.

Evans appeared to be spit at Cisse while the Senegal striker lay on the pitch, with the former Freiburg man reacting angrily and spitting back at the Northern Ireland defender.

Centre-back Evans has since denied spitting at Cisse.

A statement from Cisse read: "I have apologies to make to a lot of people today. Firstly to my teammates and to our supporters, secondly to Jonny Evans, and thirdly to every football fan who saw the incident between myself and Jonny.

"I reacted to something I found very unpleasant. Sometimes it is hard not to react, particularly in the heat of the moment. I have always tried hard to be positive a role model, especially for our young fans, and yesterday I let you down.

"I hope children out there playing football for their clubs and schools this weekend will know better than to retaliate when they are angry.

"Perhaps when they see the problem it now causes me and my team they will be able to learn from my mistake, not copy it."