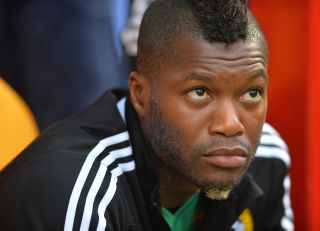 Cisse, who signed for the Corsican outfit after ending his contract at Russian club Kuban Krasnodar, has 41 caps for his country, but has not featured on the international stage since coming on as a substitute in a 3-0 victory over Albania in October 2011.

But the 32-year-old has not given up hope of forcing his way back into national coach Didier Deshamps' plans ahead of the 2014 FIFA World Cup.

"I have an objective and everyone knows what it is," he said. "I love Les Bleus and I will do all I can to rejoin them."

However, Cisse insisted his first task was to help Bastia climb into the top half of Ligue 1.

"I'm very happy to be here," he continued. "I'm ambitious. We have what it takes to be in the top 10. That's a completely reasonable and achievable goal.

"What's more, we have several players who can supply me with great passes - that was a key factor in my deciding to come here."

Cisse currently has 94 goals to his name in the French top flight from spells at Auxerre and Marseille, and the chance to reach 100 is something the well-travelled forward is looking forward to.

"To be honest, bagging my 100th Ligue 1 goal is very important to me," he remarked.

"I remember that when I was young, I would watch my big brother Abou play in Ligue 1 and hope that one day I would be able to score just one goal, so being in a position to score my 100th is a source of pride and I can't wait to do it."

Bastia currently 13th in Ligue 1 and are on a winless run of four in the competition.