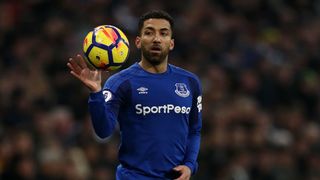 Burnley have completed the signing of Everton winger Aaron Lennon for an undisclosed fee.

The Clarets announced the deal on their official website, bringing an end to Lennon's three-year stay at Goodison Park.

Lennon, who becomes Burnley's first full signing of the transfer window following the arrival of Georges-Kevin N'Koudou on loan from Tottenham, believes he is joining a club on the up.

"The club is moving forward and I want to hopefully play a part in that to keep it going in that direction," he told Clarets Players.

"I think I've still got a lot to offer. I am only 30 and I still want to play at the highest level.

"I have missed a bit of football in the last year or so and I just want to get back and play as much as possible."

Lennon, whose length of contract was not disclosed by Burnley, came through the ranks at Leeds United before moving to Tottenham in June 2005, where he made 364 appearances in a 10-year stay and won the League Cup in 2008.

The 30-year-old, who represented England at the 2006 and 2010 World Cups and has 21 caps, added that Everton's former Burnley defender Michael Keane gave the club a glowing endorsement.

"I spoke to Keano a few times. He had nothing but good words to say about the club and he wished me well," he added.

"He's a great lad and a top player. I played with him for a little while and he’s a top player who's going to go a long way in the game."

Lennon was already on the periphery of the first-team picture at Everton, and his chances of first-team football were further diminished by the arrival of Theo Walcott from Arsenal.