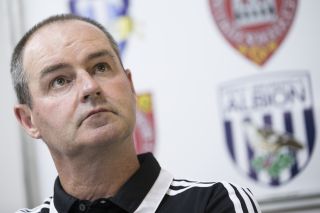 Clarke has made four signings since the end of last season, bringing in Diego Lugano and Nicolas Anelka on free transfers, while Scott Sinclair and Matej Vydra have signed season-long loan deals.

However, the Scot is worried he may not be able to make any further additions to his squad, with the deadline for transfers imminent.

"Time is short. I'm getting nervous and I’m concerned we've left it too late, that we won't get the players in to improve the squad," Clarke said.

"The chairman and (sporting and technical director) Richard Garlick are working hard to make things fall for us, but a lot of the big targets are gone now.

"As a head coach – I'm not a manager with a budget, remember – it means the club have the final say. I can make recommendations but it's down to the club to bring in players. My job is to work with the players."

West Brom are without a win in the Premier League this season and have failed to score in their two matches.

Clarke believes his side would benefit from further signings but admits he is not confident about the prospect of bringing anyone in.

"We do need some help," he continued.

"Scott Sinclair coming in was great as he gave the place a lift.

"It would be nice to get a couple of others in, but if we don't we go with what we've got. It's a long way to go until January, so there will be no other solution. At this moment I am not confident about signing anybody."

Clarke's side host Swansea City at The Hawthorns on Sunday.