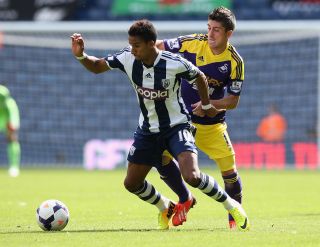 The 24-year-old, who completed a season-long loan deal from Manchester City at the end of August, has spent the last few weeks on the sidelines struggling with a hamstring injury.

The winger suffered the setback in the 2-1 victory over Manchester United on September 28, hobbling off after just 13 minutes, and he will now have to wait a little longer for his return.

"He's progressing well but as it’s a muscle injury we're just being a little bit careful. He's definitely out for Saturday."

The Scot also revealed that George Thorne and Zoltan Gera, both on their way back from anterior cruciate ligament injuries, are unlikely to return to first-team action yet.

"The ones who have been out for a little while, George Thorne and Zoltan Gera, have little niggles from the Under-21s game on Sunday," he added.

"We'll go carefully with them. Everybody else available is fit and available."

West Brom will be looking to extend their five-match unbeaten league run when they make the trip to Anfield this weekend, with draws against Stoke City and Arsenal in their previous two fixtures.