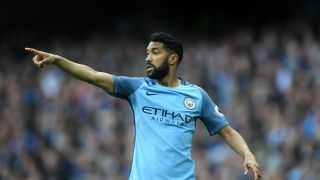 Gael Clichy has told Manchester City fans he will leave the club after six seasons at the Etihad Stadium when his contract expires next month.

Clichy joined City from Arsenal in 2011 and made 203 appearances, winning two Premier Leagues and EFL Cups.

The 31-year-old is one of five remaining senior players out of contract at the end of Pep Guardiola's first season in charge along with Willy Caballero, Bacary Sagna, Yaya Toure and Jesus Navas.

Speaking to supporters at an exclusive screening of the club's 93:20 film, which documents the events surrounding Sergio Aguero's dramatic title-sealing goal against QPR in 2012, Clichy was asked whether he expected to be playing alongside Joe Hart next season – the England goalkeeper who was sent on loan to Torino in Serie A after it became apparent he did not feature in Guardiola's plans.

Clichy made 39 appearances in all competitions for City this term, scoring two of his three career goals for the club, and completed 90 minutes in Sunday's final-day thrashing of Watford.

Speaking after the game at Vicarage Road, Toure told reporters he wished to see out his career in Manchester and was hopeful over a new deal.