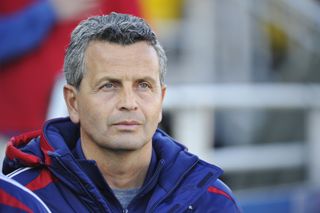 The Fire missed out on a post-season spot in the Eastern Conference by just goal difference to Montreal Impact.

Chicago were beaten 5-2 by New York Red Bulls in their final regular-season game on Sunday, failing to take advantage of Montreal's 1-0 loss to Canadian rivals Toronto a day earlier.

Klopas had held his position since 2011 and also finished agonisingly short of a play-off spot in his first season.

"Frank has been a big part of this organization for many years as a player, technical director and coach. I want to personally thank him for his efforts over this period. He is a wonderful friend and will always be a member of the Fire family.

"There have been many highlights over these years but I think now is an appropriate time to make a transition to new leadership.

"Of course, making this team compete for championships on a consistent basis is our first priority."

Klopas is already the second head coach to depart a franchise after the regular season, with Schellas Hyndman having resigned from Dallas on Saturday after their 2-1 loss at San Jose Earthquakes.