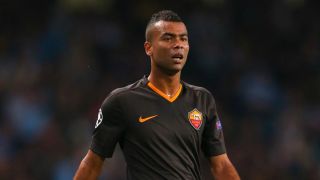 Roma has confirmed the termination of fullback Ashley Cole's contract by mutual consent.

The ex-England international moved to the Stadio Olimpico in July 2014 but struggled to hold down a regular place under former Roma coach Rudi Garcia.

The Frenchman was sacked last week after a poor first half to the campaign and Cole has also now departed after agreeing to the early termination of a deal that was due to expire in June.

"AS Roma can today confirm that Ashley Cole's contract has been terminated by mutual consent," read a statement from the Serie A club. "The club would like to thank Cole for his commitment during his stay in Rome and wish him the very best for his future career."

Cole made just 16 appearances in all competitions for Roma, and is reportedly due to join former England teammate Steven Gerrard at LA Galaxy in MLS.