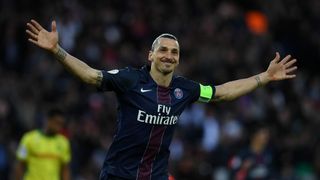 Andy Cole hailed the signing of Zlatan Ibrahimovic as a "massive coup" for Manchester United and has no doubt the former Sweden star will make a big impact at Old Trafford.

The 34-year-old ended all speculation about his future this week by announcing he will continue his career at United, having left Paris Saint-Germain after his contract expired.

Ibrahimovic moves to the Premier League after a typically prolific season in which he scored 50 goals in all competitions for PSG.

And Cole, who scored 121 goals in 275 appearances for United, is delighted with Ibrahimovic's arrival and is confident he will score plenty of goals for his new club.

"Ibrahimovic is a maverick who speaks his mind and that's my kind of guy. He's a footballer who scores goals and has achieved everything," Cole told the official United website.

"I think he'll make a massive impact here, just with his presence and the way he is. I think the fans will love him and appreciate him. He is a big-game guy. If you look at his CV, wherever he has gone, he has won championships and scored goals.

"He got 50 goals in France last season and, while people might say it's not the strongest league, regardless he's done it. Can he score goals in the Premier League? Yes. Can he make a big impact at Old Trafford? I honestly do believe so.

"I think it's a massive coup, I really do believe that, as he's such a big presence with what he can bring to Old Trafford."