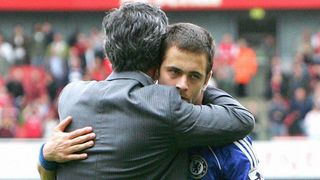 Former Chelsea star Joe Cole believes it is not beyond Jose Mourinho - "the best manager in the world" in his opinion - to steer the club to back-to-back Premier League titles, despite heading into this weekend 17 points adrift of leaders Leicester City.

Intense speculation over the Portuguese's futures continues, but Cole - who won the Premier League twice under Mourinho - has confidence he can trigger a change in fortunes to such an extent that Chelsea could finish as champions again.

"Anything is possible, and that's why we watch football," Cole told Sky Sports' Soccer Saturday.

"You can't rule them out as champions…that team could beat everyone from now until the end of the season.

"I'm not saying it's going to happen, but it's football. It'll be interesting in the next few weeks. The fans haven't turned, they're right behind the manager and the chairman.

"The main thing you've got to think about is you've got the best manager in the world there…fact.

"That's not down to opinion, he's the most decorated over the different leagues.

"For Chelsea to move forward, you've got to stick with the manager and let him do what he does best. I don't think anyone can dispute his record and I'm sure he'll be relishing turning it around."