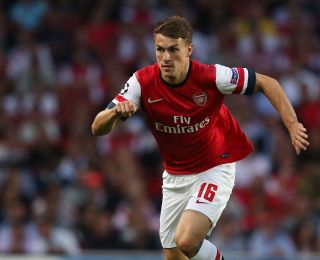 The former Fulham boss wants his key assets, such as Arsenal midfielder Aaron Ramsey, to be at his disposal whenever they are fit.

However, Coleman fears that some managers see international fixtures as an opportunity to rest their players.

Ramsey has been named in the Wales squad for the FIFA World Cup qualifying double-header against Macedonia and Serbia in September, after missing the fixture with the Republic of Ireland on August 14 with an ankle injury.

Wales' hopes of reaching the 2014 World Cup in Brazil hang by a thread, but a strong finish would see their seeding improved for future campaigns and Coleman wants his star players available for the remaining qualifiers.

"Aaron is one of our best players and we don't want domestic managers thinking they can use these two weeks as a rest period for their players," he said.

"If someone doesn't play for us and then the following week plays for his club, then that tells me they simply used this period as a rest.

"My view is that every game for Wales is hugely important and I don't want club managers thinking they can pull their players out of these coming matches just because we can't qualify any more.

"We've got to finish as high as we can because it's not just these qualifiers, it's the next ones and how high we can get ourselves up in the rankings."

Coleman believes that Ramsey's impressive recent form is a result of an extended run of first-team games, having initially struggled to recover from a double fracture in his right leg suffered in a league match with Stoke City in February 2010.

"Aaron's well-documented injury clearly hit his confidence, but he does appear to be over that at last," Coleman added.

"Anyone would have been affected by that injury. It takes time to get back from that and what you need is to be playing every week.

"But the difficulty when you are at a club of Arsenal's stature and level is that there is a big squad of players and sometimes you don't get those chances.

"The only thing Aaron needed was a consistent run of games and he's had that so far this season. What we're seeing is a rhythm from playing a sustained number of games and that is demonstrated by the excellent form he is showing."