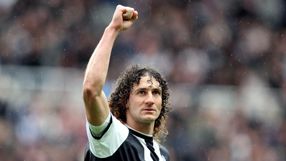 The Argentine has been keen to return home because of personal issues and there were fears he might move during the January transfer window, leaving Newcastle in the middle of a relegation scrap without their most influential defender.

However, Pardew said Coloccini would remain with them for the last 15 Premier League games.

"Coloccini is going to stay with us and will remain as captain which is fantastic news for us," Pardew told Newcastle's website. "We have managed to persuade him that, as much as his family, we need him.

"He has shown fantastic loyalty to continue playing and see us through to the summer at the very least. It's a situation me and Colo have been on a personal journey, to make sure he understands he has a big responsibility here to fans and to families of this club.

"This club has been relegated before [in 2008/09] and people lost their jobs here. We need our captain in and around us and I'm pleased to say he has agreed to accept that."

Pardew has been busy during the transfer window reinforcing a squad run down by injuries.

Newcastle's latest French recruit, Toulouse midfielder Moussa Sissoko, said it was the right time for him to make the move.

"At Toulouse I was lucky enough to play in nearly every game," he said. "But for me it was time for a new challenge.

"I've always said this is the best league and a league that corresponds with my style of play."

Pardew's side, who are not in FA Cup action this weekend after losing to second-tier Brighton and Hove Albion in the third round, have an important league fixture at fellow strugglers Aston Villa on Tuesday.