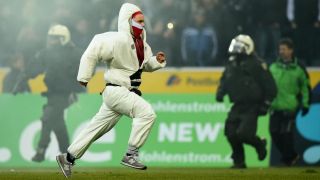 Tens of fans donning the white outfits emerged from a section of the ground housing away supporters after Granit Xhaka had netted a stoppage-time winner for the hosts.

Flares were also hurled onto the playing surface, before the offenders made their way from the pitch as police closed in.

"Cologne will do everything in his power, as it has done in the past, to identify the perpetrators and sanction the groups involved," read a statement.

"We also appeal to fans to distance themselves clearly from those that are extremely harmful to the club intentionally by their illegal behaviour."

While amateur video footage shows some Borussia fans taking matters into their own hands, the club praised the overall good behaviour of their supporters.

"Kudos to Borussia supporters who stayed calm and did not have to be provoked by the events," said managing director Stephan Schippers.