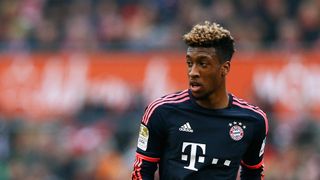 Bayern Munich winger Kingsley Coman is looking forward to teaming up with coach Carlo Ancelotti again and is confident the Italian is the right man to lead them to further success.

Coman previously worked with Ancelotti at Paris Saint-Germain, with the 57-year-old handing the France international his professional debut at the tender age of 16.

"I was really pleased when I heard Ancelotti would replace [Pep] Guardiola. I know him from my time with PSG and have nothing but fond memories of him," Coman told the official Bundesliga website.

"He is a great coach and a wonderful human being. Communication is really important to him. His door is always open to anyone. He never raises his voice, he is a natural leader. He can deal with every kind of person.

"He is very experienced, which means it is nearly impossible to surprise him. He is extremely professional. He always wants his team to be in control. He is very flexible tactically and always comes up with some new tactical idea.

"It's definitely not a bad thing for me that I worked with Ancelotti before. He gave me the chance when I was just 16. But I know that I will have to work hard to achieve my goals. I was happy with my first season at Bayern, but I want more next year.

"We are very ambitious and I have no doubt Ancelotti is the right man for us."