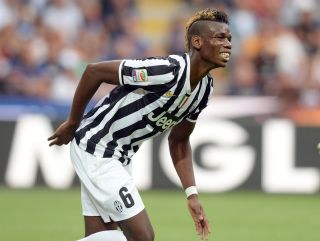 Pogba has played every game this season for Juventus, who are unbeaten in the first seven league games in 2013-14.

The France international's performances for the Turin club have reportedly received attention from a number of clubs, with Arsenal, Chelsea and Manchester United - the club Pogba left to join Juventus in July 2012 - all said to hold an interest in the 20-year-old.

Pogba, though, insists he is happy at Juve and has no immediate plans to move elsewhere.

"The fans fear losing me? But I'm not anybody yet," he told Gazzetta dello Sport.

"I look at (Andrea) Pirlo and (Gianluigi) Buffon, and I learn from true champions.

"Juventus for life? Promises like these have no sense, because you cannot know what there will be in the future.

"I look at the present and I say I'm fine here in Turin, I love everything about Juventus - the managers, the coach, my team-mates and the fans.

"At the moment I don't see myself anywhere but Juventus."

Juventus sit third in Serie A as a result of their fine domestic form, but they face a tough challenge if they are to progress from their UEFA Champions League group, having drawn against Copenhagen and Galatasaray in their first two matches.

Antonio Conte's men twice meet Real Madrid in their next Champions League fixtures, and Pogba is confident they can overcome the Spanish giants in spite of their poor start to the tournament.

"There's nothing to fear," he added.

"We will beat Real at least once and we will go forward.

"We are Juve; we must never forget that. Because of the history, prestige and quality of this club, we are inferior to no-one.

"And for this reason, Real Madrid do not scare me. Juventus is on the same level of all the European greats.

"We can even win in Madrid."