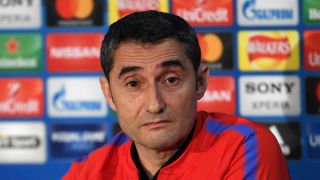 Barcelona coach Ernesto Valverde conceded the timing of Thursday's LaLiga clash with Las Palmas, which comes just three days before a crucial clash with closest challengers Atletico Madrid, is detrimental to the team.

The league leaders are seven points ahead of Atletico, but their advantage could be trimmed to four by the time they kick off against Las Palmas, a fixture that takes place 24 hours after Diego Simeone's men face Leganes.

A win for Barca against Atletico on Sunday could go a long way to deciding the destination of the title and Valverde hinted at dissatisfaction with their opponents being given an extra day's rest.

Asked if the fixture list is hurting Barca, Valverde replied: "Yes, this week. Each team has moments throughout the season in which there's less time between matches to rest.

"There are a lot of questions and reasons why the schedule is the way it is. Normally when two teams have a day free they normally play that day. We have a long trip, it's not Atletico's fault.

"A lot of time they play on Thursday because of the Europa League and then they have to play Sunday. I've been there.

"There's nothing you can do, they're different competitions. Considering the importance of Sunday's game, it's something to think about. We just have to play the game."

Ernesto Valverde: "Las Palmas will pressure high up the field and will play it out from the back. That will have a physical cost for us. They are a team who have improved at the back in recent matches" February 28, 2018

Valverde also dismissed claims from Simeone, who led Atletico to LaLiga glory in 2014, that only Barca and Real Madrid can win the title.

"Keeping in mind how he competes it's clear Atletico will fight until the end," Valverde added. "He doesn't think the league is over. Of course not."

The visit to Las Palmas presents Barca with the task of overcoming a side who play an open brand of football under Paco Jemez.

Las Palmas are third-bottom in LaLiga and have shipped the second-most goals in the division having conceded 52.

But Valverde does not believe their approach will be of benefit to his star-studded attack.

"Quite the contrary, you have to be able to overcome that," he said. "They're not going to run and hide. They're going to pressure us, they always do.

"They're going to come out and play. That's no help to us. It's a very good team and defensively they're improving in the last few games."