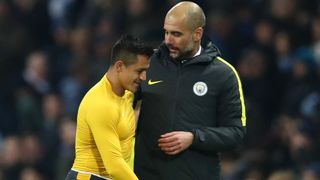 Pep Guardiola wished "good luck" to Alexis Sanchez as the Arsenal forward nears a blockbusting move to Manchester United at the expense of Manchester City.

City engaged in a lengthy pursuit of a player the Catalan coached at Barcelona, with attempts to sign the Chile international on deadline day in August scuppered when Arsenal were unable to secure a replacement.

The Premier League leaders were reported to have agreed terms with Sanchez and his agent Fernando Felicevich for a January move until an approach from United emerged, with Guardiola's club understood to be unwilling to meet the lavish terms on offer from Old Trafford.

The finer points of a deal for Sanchez to join United, with Henrikh Mkhitaryan earmarked for a switch in the other direction, are yet to be ironed out but, speaking at a news conference ahead of Saturday's Premier League match against Newcastle, Guardiola denied there were any hard feelings on his part.

"I'm not a guy with mathematics and the numbers. In the end, what I know right now is he is still an Arsenal player," the Catalan said, before offering wishes of goodwill in the week he celebrated his 47th birthday.

"I think he is going to go to United, so congratulations to both of them. When the players have contenders they decide where they want to play. They decided that. Good luck.

"The players and their managers [agents] decide what is best for both of them. There is nothing to add

"My opinion of Alexis remains the same. It was a pleasure to be with him at Barcelona, he is going to decide to move on to another club and I wish him all the best."

Jose Mourinho has been talking about Alexis Sanchez and that potential swap deal involving Henrikh MkhitaryanRead the full story:January 19, 2018

Guardiola stated no progress had been made on City's pursuit of an additional centre-back, with West Brom captain Jonny Evans again said to be on their radar, while he has significant concerns at left-back.

Fabian Delph will be out for "a while" after suffering a knee injury in the 4-3 defeat at Liverpool – a period that apparently encompasses at least this weekend and the FA Cup fourth-round trip to Cardiff City – and Benjamin Mendy's ruptured anterior cruciate ligament means City's only specialist in the position remains a long-term absentee.

Ukrainian youngster Oleksandr Zinchenko has stepped in impressively at left-back during the EFL Cup this season, despite being an attacking midfielder, and Guardiola will seek similar flexibility from his squad to ride out a selection headache.

"Right now, immediately in the next weeks we have a problem. We had a problem all season because we decided to start the season with one left [back]," he explained.

"We had no options to buy because we spent enough money in the summer time to change the full-backs.

"Now we are going to solve the problem with Fabian Delph because the problem is not just for one game or two games. It will be longer."

To counter City's designs on Sanchez hitting the buffers, the club secured extended contracts for centre-back Nicolas Otamendi and midfielder Fernandinho this week.

"We are so happy, congratulations for the club, for the players and their agents. We are so happy that Nico and Fernandinho can stay with us longer," Guardiola said, before reserving special praise for Fernandinho.

"When Fernandinho and I are no longer together, I will look back at our time and remember that he is one of the players that I have enjoyed coaching the most. He is an essential player for this club, both on and off the pitch."