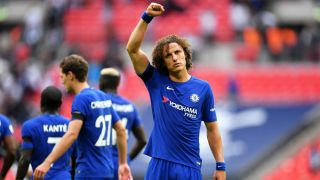 Chelsea boss Antonio Conte eased fears over David Luiz's wrist injury by insisting the defender will be fit for the trip to Atletico Madrid next week.

The Brazilian reportedly fractured his wrist after colliding with the advertising hoardings in Sunday's 0-0 draw with Arsenal, before later being sent off for lunging in on Sead Kolasinac.

While he would not confirm the specifics of the injury, Conte is confident of having the 30-year-old available for the Blues' second Champions League group stage clash.

"He must be okay. David is an important player for us," Conte said after the defeat of Forest.

"I know what happened at the end of the first half [against Arsenal] and for sure he will be ready for Atletico."

Chelsea's win over Forest, sealed courtesy of a Michy Batshuayi hat-trick, set up a fourth round EFL Cup date at home to Everton.

Ronald Koeman's side beat Sunderland 3-0 to reach the last 16 and Conte believes the match will be a difficult challenge despite the Toffees' poor Premier League form.

"It is a tough game. You know very well that they are one of the best teams in the league," the former Juventus and Italy manager said.

"But we are ready. We are a great club and for this reason every competition is important to us."