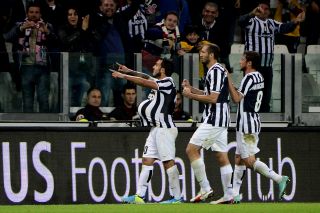 Arturo Vidal and Andrea Pirlo scored in the first half as the Serie A champions took control of the fixture in Turin.

Carlos Tevez scored his third goal in as many Serie A matches after the break before Leonardo Bonucci sealed the result against the 10-man Catania.

He told Sky Sport Italia: "Carlos is very generous and also keeps his cool in the box. When he gets a scoring opportunity, he has the calm head to take it.

"Sebastian Giovinco is finally in good shape, above all psychologically, so we need the fans to start applauding and supporting him. He is a product of our youth academy and should be considered a source of pride for our colours.

"Andrea Pirlo is the only Italian player in the running for the Ballon d'Or, so his qualities are obvious throughout his career."

Conte was also happy with his defence, as they recorded a second clean sheet in a row.

Juventus conceded 10 goals in the four matches before Sunday's 2-0 win over Genoa, and Conte is pleased with the way his back four, and goalkeeper Gianluigi Buffon, have responded.

"We put together two positive performances and we needed to keep two clean sheets in a row," he said.

"We conceded 10 goals, which was unusual because defence has always been our strength. We had to shake off the two defeats to Fiorentina and Real Madrid.

"This was a good result and we definitely need to improve, even if it's not easy playing every three days."