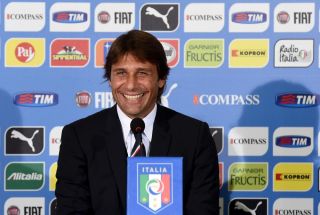 Italy has played second fiddle to its national club competition - Serie A - amid the team's struggles for identity in recent years.

Since winning the World Cup in 2006, Italy have failed to make it out of the group stage in both South Africa and Brazil, where they were jeered, whistled at and insulted according to former coach Cesare Prandelli after finishing behind Costa Rica and Uruguay.

Italy's failure at the 2014 showpiece cost Prandelli his job, with Conte stepping into the hot seat.

The former Juventus boss has overseen back-to-back wins since taking the reins, a 2-0 international friendly triumph against Netherlands followed by victory over Norway by the same scoreline in their opening Euro 2016 qualifier last month.

And Conte is hoping to entertain the fans and dominate the headlines when Italy host minnows Azerbaijan in Group H action in Palermo on Friday.

"In the past our national team games have always run the risk of being ignored whereas what happens in the domestic league hit the headlines," Conte told reporters.

"But these games are vital for us. We play to qualify.

"That said, my players know that we have just sparked a tiny new flame of enthusiasm about Italy as a national team.

"Now it's up to us to give people positive emotions, passion and enthusiasm through our performances, made from good play, will and determination.

"People need this and we know it. We will try to deliver it along this path of improvement of ours."