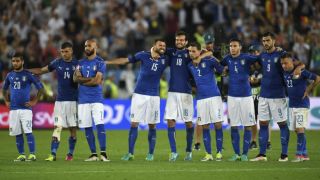 Italy coach Antonio Conte insists there is "no shame" in losing via a penalty shootout after his side were eliminated by Germany in the Euro 2016 quarter-finals on Saturday.

Leonardo Bonucci cancelled out Mesut Ozil's opener in Bordeaux, with the two heavyweights locked at 1-1 after 120 minutes.

While Italy and Germany had never met in a shootout at a major tournament before, the world champions had the better record - unbeaten via spot-kicks since 1976.

That fact did not change at the end of a bizarre shootout, in which seven players failed to score.

Matteo Darmian's miss proved the most costly, with 26-year-old Jonas Hector then slotting the winning penalty to send Germany into the semi-finals.

"The lads gave everything they had against a very strong side," Conte - who is leaving his post to join Chelsea in the Premier League - told Rai Sport.

"Being beaten by Germany on penalties is no shame, as we could've gone forward too. I am proud of what these lads did.

"The world champions changed their system for us and that's a reason to be proud."

He added: "Regrets? Only for the penalties, not for the effort and love they showed for the jersey. These players really proved everything and gave all they had.

"I don't like to make evaluations, I prefer to leave that to others. What interests me is that I had an incredible experience with these lads, making Italy respected and feared by everyone.

"We tried and were able to make the fans proud of us. We made the players truly aware that it's a privilege to wear the shirt."