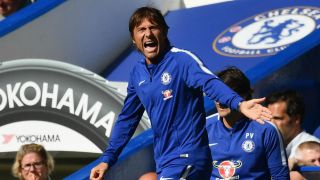 Chelsea boss Antonio Conte claims recent speculation linking him with a return as Italy boss is wide of the mark.

Conte left the Azzurri role after Euro 2016 to join the west London club but a recent radio interview in Italy, in which he admitted he missed his native country, has prompted suggestions he will return to take charge of the national team at the end of the season.

Italy, under Gian Piero Ventura, failed to secure an automatic place at the 2018 World Cup and will have to navigate the play-offs, but Conte is adamant he has no immediate plans to ride to the rescue and is willing to see out his Stamford Bridge contract that runs until 2019.

He said: "For two weeks I have been reading the wrong things. I did an interview two weeks ago and I am sure the translation was wrong because all I said was that one day in the future I'd like to go back to Italy.

"I have two years left on my contract with Chelsea and I am happy to work for this club, with my players, I like to work with them.

"I like to have these great feelings with our fans and I don't see a problem but sometimes we want to create this type of situation.

"My family stay here with me, not in Italy. My daughter is going to school here in Cobham and it's important to write the truth."

Asked if he knew what he wanted to do after 2019, he added: "Every coach when they start work with a club, for sure you hope to stay for a long time and try to do something important for the club. But, at the same time, I always said it's very difficult and our job is very strange because one day you are the best and another day you stay at home."

Conte also played down suggestions Andrea Pirlo, who he managed when with Italy and Juventus, could join his coaching team at Chelsea when his playing career with New York City ends in December.

He added: "I know that Andrea has decided to retire and finish his career. I can talk about him in the best way but at this moment he doesn't know his future, or what he wants to do when he finishes."