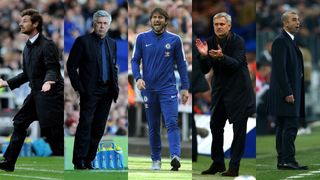 Antonio Conte's reputation is unlikely to be damaged by Chelsea's struggles this term, as he is only the latest in a long line of managers to have followed stunning success with relative failure and swift dismissal at Stamford Bridge.

Although the Italian has signalled his intention to see out the final season of his three-year Chelsea contract, it feels increasingly inevitable that Saturday's FA Cup final against Manchester United will be his last game in charge.

With Chelsea missing out on Champions League qualification - they finished five points outside the top four after a final-day thumping at Newcastle United - Conte is almost certain to be discarded regardless of the outcome at Wembley.

He would not be the first manager to be sacked after delivering the FA Cup, of course, with the same fate befalling Louis van Gaal at United in 2016.

While Van Gaal has not worked since, Conte will surely find himself a prized job, despite Italy and Paris Saint-Germain having already secured new coaches.

But how has it gone so wrong for the man who led Chelsea to the Premier League title in his first season in English football? And what can the Blues do to break the cycle of boom and bust in west London?

It is no secret Conte did not get the players he wanted following his title success, while selling Nemanja Matic to United did not meet with the approval of the 48-year-old.

Matic's supposed replacement Tiemoue Bakayoko should not be written off, but has comprehensively failed to fill the void left by the Serbian holding player this term.

Missing out on Chelsea's former striker Romelu Lukaku - who also headed to Old Trafford but might not be fit for the final due to a foot injury - was a further blow, with Alvaro Morata struggling to justify his club-record fee amid form and fitness woes.

9 - Alvaro Morata has scored nine headed goals in all comps; two more than any other Premier League player. Bonce.April 22, 2018

Olivier Giroud has been the main success of the 2017-18 incomings, the France forward scoring a superb solo goal in the semi-final win over Southampton, and is set to start in place of Morata on Saturday. But Chelsea have missed Diego Costa badly after the striker was ostracised by Conte and subsequently headed back to Atletico Madrid in January.

There is no doubt Chelsea's squad, without Costa and Matic, is significantly worse than last season, with Conte unable to bring in reported top targets including Juventus full-back Alex Sandro and Napoli forward Dries Mertens.

When Conte turned up for the opening-day defeat at home to Burnley looking scruffy in a tracksuit it felt like the Italian, usually pristine in a dark suit, was sending a clear message to the board.

After Jose Mourinho's sacking in 2015, Chelsea fans displayed a banner that accused three players of being "rats" for failing to perform to a high enough standard to keep the Portuguese coach in post: Costa, Eden Hazard and Cesc Fabregas.

Hazard's form was sensational last season, although team-mate N'Golo Kante pipped the Belgium international to the PFA's Player of the Year award, and the winger has not reached the same heights again this season, scoring 12 Premier League goals, the same as Glenn Murray.

Fabregas has been a similar disappointment this season after forcing his way into Conte's strongest XI towards the end of 2016-17 and it is tempting to wonder if the duo might feature on more banners at the start of next term should Conte be fired.

There have long been rumours about senior players at Stamford Bridge holding too much influence and this needs to be addressed, irrespective of who is in charge in August.

John Terry lifting the Premier League trophy on the parade bus today! May 25, 2015

Should Conte depart as expected, he will be the 12th manager, not including short-term caretakers, to leave Chelsea since Arsene Wenger took charge at Arsenal in 1996 - with Mourinho and Guus Hiddink each having two bites at the cherry, althought the latter stepped in as a firefighter on each occasion at the behest of his long-term acquaintance Roman Abramovich.

With such a rapid turnover of coaches it is clear there is a deep problem at the club that appears to encourage a cycle of success and resulting failure that has been so evident in recent years, a lack of patience at board level exacerbating the issue.

Chelsea can point to the five Premier Leagues the club has claimed since Wenger last lifted the trophy as a sign stability does not count for everything, especially in the modern era. The Blues also won the 2011-12 Champions League under one of their short-lived bosses, Roberto Di Matteo.

But with Pep Guardiola seeming set to establish a dynasty at Manchester City - although Mourinho's United and Jurgen Klopp's Liverpool will have something to say about that - Chelsea cannot hope to rely on an elite interpretation of the 'new manager bounce' effect any longer.

Whether Conte is the man for the job or not, Chelsea have to end the boom and bust era if they are to re-establish themselves as perennial title contenders in England and Europe.