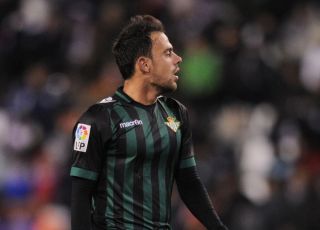 Zaragoza are currently playing consecutive seasons in the second tier of Spanish football for the first time since 1956 after they struggled to 14th last term.

And their poor start to the current season continued as their winless streak extended to four matches courtesy of Chumbi's goal on the stroke of half-time.

Albacete – who also play in Segunda Division – had not won this season either prior to their triumph at the Estadio Carlos Belmonte.

Real Betis avoided an upset with a 2-0 home triumph against Llagostera.

Another team who lost their top-flight status earlier this year, Real Valladolid, were 3-1 winners at Sporting Gijon.

Alejandro Alfaro and Samuel Llorca both netted in the second half for Valladolid.

Mirandes' class told with a 4-1 win over Racing Ferrol. The second-tier side beat their Segunda B opponents comfortably thanks to a hat-trick from Urko Vera, while Las Palmas won 2-0 at Mallorca.

A host of ties were played between Segunda B sides with Lleida Esportiu thrashing Guadalajara 3-0.

Linense cruised to a 4-1 success against Fuenlabrada, Cornella edged Zamora 3-2 and Huesca beat Villanovense on penalties 4-3 after the sides were locked at 2-2 after 120 minutes.

Elsewhere, Cadiz and Recreativo Huelva beat Lealtad and Ponferradina 2-1 and Sabadell won at Real Murcia by the same scoreline.

Murcia edged Eldense 3-2 on penalties after the sides could not be separated at the end of extra time with the score at 1-1.

And Leioa of the third tier posted an expected 2-0 win against Teruel of the Tercera Division.