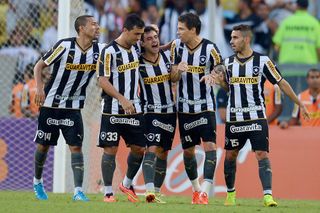 Going into the second leg in Fortaleza down 2-1 on aggregate to the Serie B side, Botafogo needed a good start and they got it through a well struck Edilson free-kick after 16 minutes.

However, two quick goals from the hosts saw them go ahead 4-2 on aggregate and it seemed Botafogo were destined to exit the tournament.

A diving header from Yuri Mamute dragged Botafogo back in it once more in the dying minutes of the first half but a goalkeeping howler from Andrey allowed Bill to score his second of the night and once again put Ceara in a seemingly winnable position with the aggregate score 5-3.

But in a frantic period of injury time Botafago's Luis Ramirez took over the game, scoring in the 95th minute to make it it 3-3 on the night before he set up Andre Bahia to win the tie in the most dramatic fashion as Vagner Mancini’s men went through on away goals after the 180 minutes ended 5-5.

Two spot kicks from Alecsandro and a late goal from former Arsenal man Eduardo Da Silva made it 3-3 on aggregate before the home side held their nerve in the shootout to advance to the last eight.

Serie A leaders Cruzeiro completed their aggregate rout of Santa Rita, winning the away leg 2-1 to prevail 7-1 overall.

ABC held out to win their second leg against Vasco da Gama 2-1 to advance to the quarter finals with a 3-1 aggregate victory.

After comfortably winning the first leg 3-0, America RN were given a scare by Atletico Paranaense before holding on to win the tie 3-2.

Corinthians proved too classy for second division side Bragantino, overturning their surprise 1-0 defeat in the first leg to win 3-1 at home, advancing 3-2 on aggregate.

Fellow Serie A side Atletico Mineiro eased past Palmeiras 3-0 on aggregate after early strikes from Jemerson and Luan handed them a 2-0 win in the second leg.

Santos were given a free passage through to the last eight with their round of 16 opponents Gremio were banned from the tournament  after their fans racially vilified Santos players in the first leg.