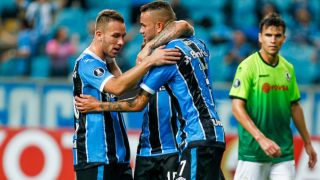 Gremio emphatically booked their spot in the Copa Libertadores last 16 as Guarani scraped through on Thursday.

With the top two places still up for grabs in Group 8, Gremio ensured they advanced with a 4-0 thrashing of point-less Zamora.

Luan opened the scoring for the Brazilian hosts in the 23rd minute before Lucas Barrios tapped in a second.

It was 3-0 before the half-hour mark as Luan stepped up to convert a penalty, and the result was sealed in the second half through Pedro Rocha.

Luan had a chance to complete his hat-trick in the 83rd minute, but this time was unable to put away his spot-kick.

The result saw Gremio finish top on 13 points, two ahead of Guarani – who played out a 0-0 draw at home to Deportes Iquique.

Deportes Iquique needed a win in Asuncion but were unable to find a breakthrough, finishing third.

In Group 3, River Plate – with top spot sealed – suffered a 2-1 loss at home to Medellin.

Despite their win, the Colombians finished third in the group after Emelec eased past Melgar 3-0 to secure second.

Barcelona and Botafogo had already advanced from Group 1 and both suffered losses.

Group leaders Barcelona went down 3-1 at Atletico Nacional, while Botafogo were edged 1-0 at Estudiantes.