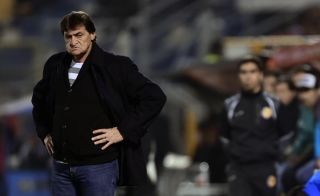 The Chilean teams suffered first-leg losses and face a battle to advance in the second most prestigious South American club competition.

An out-of-form Catolica travel to Montevideo to face River Plate, who claimed a 1-0 win in Santiago de Chile.

Julio Falcioni, under pressure at the helm of Catolica, and his team are winless in four matches and have scored just twice in that period.

"We're going to lift the mood. We have to get up. We trust our decisions and our work," he said.

It appears even tougher for Iquique, who were beaten 2-0 at Club Universitario in the first leg and host Tuesday's second leg.

Iquique are winless this season, and it would come as a huge surprise if they advanced at the expense of the Bolivians.

Elsewhere, Cerro Porteno are well-placed to progress ahead of their second leg against Uruguay's Rentistas.

The Paraguayans claimed a 2-0 win away from home to be in a strong position.

Thanks to Andres Vilches' first-leg brace, Chileans Huachipato take a 3-1 lead to San Jose in Bolivia.

Also locked at 1-1 are Emelec and Colombia's Aguilas Doradas ahead of their second leg in Ecuador.

Bolivia's Nacional Potosi visit Paraguay's Libertad with a 1-0 lead, while General Diaz go to Cobresal with a 2-1 advantage.

Deportivo Cali host UTC Cajamarca after a 0-0 draw in the first leg and Uruguay's Penarol go to Bolivia's Wilstermann leading 2-0.

Venezuelans Deportivo La Guaira and Colombia's Atletico Nacional are locked at 1-1, with the latter hosting the second leg.

Deportivo Capiata (3-1 up) and Barcelona (3-0) are in control of their clashes against Danubio and Alianza Lima respectively.

Cesar Vallejo claimed a 2-1 win at Millonarios in the first leg and host the return meeting in Peru.