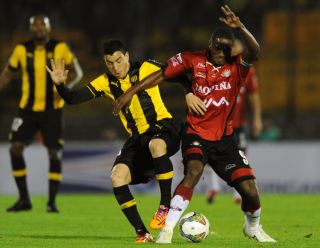 Goals from Jorge Rodriguez and Jonathan Rodriguez gave Penarol - Uruguay's most successful club - the win over their Bolivian opponents at the Estadio Centenario on Wednesday.

Midfielder Jorge Rodriguez opened the scoring after 12 minutes in Montevideo - his second goal in less than a week.

General Diaz and Nacional Potosi were the other host teams to win their first-round matches on Wednesday.

General Diaz managed to walk away with a slender advantage thanks to Roberto Gamarra, who found the back of the net in the 71st minute.

In other results, Atletico Nacional will return home to Colombia full of confidence following their 1-1 draw at Venezuela's Deportivo La Guaira.

Framber Villegas' 66th-minute opener appeared to have set Deportivo La Guaira on their way to a narrow win, only for Edwin Cardona to equalise from the penalty spot with seven minutes remaining.

Meanwhile, UTC Cajamarca and Deportivo Cali of Colombia played out a scoreless draw in Peru.