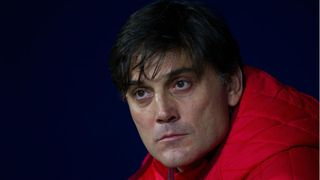 Sebastien Corchia is enjoying life in the Sevilla starting XI and has expressed his gratitude to coach Vincenzo Montella for showing confidence in his ability.

Corchia was an off-season recruit from Lille, where he was a mainstay in the team's line-up – playing all 38 Ligue 1 matches in 2016-17 – however the Frenchman struggled to cement himself in Eduardo Berizzo's side, a victim of the Argentine coach's rotation policy.

But since Berizzo's axing in December, Corchia has quickly established himself as Montella's first-choice right-back.

Corchia impressed as Sevilla staged a dramatic comeback to beat Atletico Madrid 2-1 in the first leg of their Copa del Rey quarter-final on Wednesday, securing the club's first win at Atleti in any competition since 2008.

Speaking to Omnisport, Corchia – determined to repay Montella's faith – said: "It has been a good experience with our new coach. For me personally it is great that he is Italian, because I am half Italian myself, with dual citizenship for France and Italy.

"It is easy for me to talk to my coach and understand him perfectly, because we share the same language. I feel he has confidence in me, and I will do everything to live up to that.

"Our coach talks a lot with the players - also in individual talk, and that is great. We work hard to become better as a team, and with a better tactical understanding and organisation. All the players worked together on the pitch against Atletico, and the win was because of the power and both physical and mental performance level that we put into the game.

"Our coach wants us to be more aggressive, and when we have the ball, he wants us to play faster and with a lot of movement. His goal is for us both to play good football and of course to win.

"I believe that we have the right squad with so many players of a high quality to play like this, so I am sure that we will improve and finish this season on a high."

As well as preparing for the return leg of the Copa tie, Sevilla are sixth in LaLiga and only three points behind fourth-placed Real Madrid ahead their Champions League last-16 showdown with Manchester United.

Victory after nine years on Atlético soil and the first Spanish team to win in the Wanda Metropolitano January 18, 2018

Corchia, 27, continued: "The cup win in Madrid felt like a kick-start to the second half of our season. Atletico are a great team, and we were the first Spanish team to win at their new stadium. It is a milestone for us, and we must make it a turning point.

"We have not been playing as well as we should - and not living up to our potential. But there is no panic here, just full focus on hard work. We are still in both the Copa del Rey with a chance of going through to the semi-finals, in the Champions League knockout round, and we are competing for a top-four spot, so we have everything to fight for to make this a great season.

"The supporters have a fantastic spirit in this great club and this beautiful city, and we want to climb a mountain for them. They demand a lot of us, and they have every right to do so, because we know that they are there for us. I have never seen passion like this before, and I enjoy it. It motivates me a lot.

"The away win against Atletico is a reference game for us. That is how we must perform every time. It gives us confidence, because that result was great, and we were rewarded for our hard work, but if we go down from that high level next time with a disappointing performance, then we have achieved nothing yet. Now is the time to prove what we can do as a group."