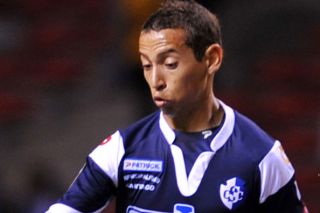 Kevin Vega scored a goal in each half to seal the three points and top position in the standings after Herediano lost 1-0 to Santos de Guapiles on Saturday.

A 32nd-minute goal to Jose Perez secured for victory for Santos de Guapiles and handed Herediano their first loss of the season.

Alajuelense kept pace with the leaders after a comfortable 3-0 home win over struggling Puntarenas.

Striker Jose Ortiz scored a brace with goals in the early and latter stages of the match, while Jerry Palacios hit the back of the net on 17 minutes.

Puntarenas only have one point from their first four matches and are rooted to the bottom of the table.

Limon were denied their first win of the campaign after a 1-1 draw at Deportivo Saprissa.

After taking a 57th minute lead through Diego Diaz, Limon conceded nine minutes later as Saprissa's Manfred Russell earned a point for his side.

In other matches, UCR delighted their home fans with a 2-0 triumph over Belen Siglo XXI, while Carmelita completed a 2-1 road trip win away to Perez Zeledon.