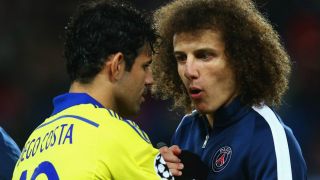 Some reports have suggested Costa could be on the move from Chelsea, with his former coach Diego Simeone rumoured to be keen to bring him back to Atletico Madrid.

David Luiz has said if the 27-year-old decides to leave the Premier League, PSG would welcome the Spain international with open arms.

"Diego is one of the most clinical strikers in Europe, he would be a welcome addition to any team," the Brazil defender told The Mirror.

"I think PSG have made their intent clear over the last three or four seasons, that we only add the best player.

"If Diego decides he has had enough of England and wants a new challenge, of course he would be welcome here.

"Diego and myself have had our clashes on the field, but you must understand there are two Diego's.

"On the field he is physical, he is confrontational, he will get in your face, that is part of his game.

"Off the field he is a good friend, one of the nicest guys you can meet, somebody I would go to dinner with."

Chelsea and PSG will meet in the Champions League round of 16 and Luiz is wary of the threat the English club poses, despite their domestic struggles this season.

"We have two very big games coming up against Chelsea," he said.

"With them having such a poor season in the league they will be even more motivated to do well in Europe.

"I welcome two big battles with Diego. I am sure they will be physical, but both games will end in a hug."