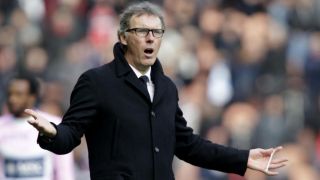 Laurent Blanc has conceded his Paris Saint-Germain side are in need of a boost ahead of their Coupe de France last-32 clash with former club Bordeaux on Wednesday.

PSG ended a run of three league games without a win by beating lowly Evian 4-2 on Sunday, but were forced to respond after initially falling behind and then conceding an equaliser in an unconvincing performance.

Bordeaux - who Blanc led to a Ligue 1 and Coupe de la Ligue double in 2008-09 - are the next visitors to the Parc des Princes.

Willy Sagnol's men lost 3-0 in the league meeting in the capital in October but can have hope of springing a surprise versus a PSG team that Blanc admits are running low on energy.

"Our problem is that we played such beautiful football last year," Blanc said.

"Everyone expects us to be the same this year. I assure you, we are in the same state of mind, but the players are not in the same place physically and mentally. We must re-energise the group."

Ligue 1 leaders Lyon have won the competition five times but face a stern test as they visit the Stade de la Beaujoire to take on a Nantes side pushing for a top-six finish.

Nantes boss Michel der Zakarian has called on his side to be more clinical in front of goal, and they will need to heed his words versus a Lyon team that has scored 45 times in the league.

"Our ambition is to have a better season than last year and we need to improve in an attacking sense if we're to score goals," Der Zakarian said.

Lyon's fierce rivals Saint-Etienne will be out to avoid a shock at second-tier Tours, while Nantes' Brittany foes Rennes host Reims.

Quevilly will be aiming to evoke memories of their run to the final in 2012 by beating Bastia. An upset could also be on the cards when Championnat National team Avranches aim to keep their cup campaign alive against Metz.