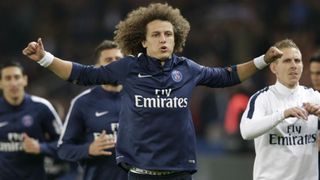 Holders Paris Saint-Germain came from a goal down to defeat Toulouse 2-1 and book their place in the last 16 of the Coupe de France.

Francois Moubandje gave the visitors an 11th-minute lead at the Parc des Princes, and the home side were jeered off by the crowd at the half-time interval.

However, David Luiz levelled the scores with a powerful header from a corner before Zlatan Ibrahimovic - who had started the game on the bench as manager Laurent Blanc opted to rotate his squad - scored the winner from the spot.

The Swede converted a penalty awarded in the 89th minute following a foul on full-back Layvin Kurzawa. The result stretches PSG’s winning run in all competitions to 10 matches.

Bourg-Peronnas are also through to the next round after they caused an upset away at Rennes, dumping their top-flight opponents out of the competition thanks to a 3-1 win.

Rennes had taken the lead through Steven Moreira after 21 minutes, only for their opponents to hit back with three second-half goals. Julien Begue and Lakdar Boussaha scored to put Bourg-Peronnas ahead, with Pape Sane sealing an unlikely win with a late penalty.

Championnat de France Amateur side Sarre-Union are still afloat in the competition too, Vianney Schermann's 90th minute winner seeing them record a 1-0 result against Niort from Ligue 2.

Bordeaux progressed thanks to a 2-1 victory away at Ligue 1 rivals Angers.

Jussie and Enzo Crivelli scored either side of half time for Bordeaux, though a 69th minute goal from Billy Ketkeophomphone made for a nervy finish.

Sochaux progressed courtesy of a 2-1 result at Bastia, Adolphe Teikeu and Raphael Caceres getting their goals to sandwich an effort from Francois Kamano for the hosts.

Khalid Boutaib was the hero for Ajaccio in their tie with Ligue 1 strugglers Guingamp, the striker scoring all three of his team's goals in a 3-0 triumph.