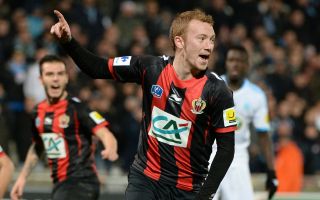 The 10-time winners took the lead after just three minutes through striker Andre-Pierre Gignac, only for goals from Alexy Bosetti and Neal Maupay to turn things around for the visitors.

Gignac's second gave Marseille hope just before the hour-mark, but Fabrice Abriel's 88th minute effort effectively killed the game off, despite a stoppage-time goal at the right end from Diawara.

The 2011 winners Lille remain in the hunt to lift the trophy again following a 3-0 win at fifth-tier side Iris Club de Croix, with Simon Kjaer, Tulio de Melo and Divock Origi netting in a comfortable victory for Rene Girard's men.

An extra-time strike from Deme N'Diaye gave Ligue 2 promotion-hopefuls Lens a 2-1 success over Bastia, whose Corscian rivals Ajaccio were beaten 2-0 at home by second-tier Caen.

Sochaux succumbed to a 1-0 loss at Angers, the Brittany club - who sit second in Ligue 2 - progressing thanks to a second-half effort from Djibril Konate.

Claudio Beauvue struck the winner as Guingamp needed extra-time to beat fourth-tier Concarneau 3-2, while CA Bastia overcame Niort 3-2 on penalties in a tie that finished 2-2 after extra-time and both sides were reduced to 10 men.