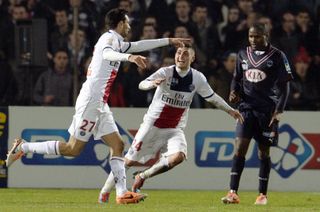 PSG qualified for the last four of the competition with an impressive performance on Tuesday, as their bid for a domestic treble gathered pace.

The Ligue 1 table-toppers took the lead on the stroke of half-time thanks to the influential Javier Pastore, who starred throughout the match.

The goal came shortly after star striker Zlatan Ibrahimovic had a volley correctly ruled out for offside, but just after the break, Bordeaux levelled proceedings through Andre Biyogo Poko.

That set up a tense finish, but just as extra time looked likely, PSG scored the all-important second goal.

Pastore was the provider, producing an exceptional dink that Rabiot ran onto in the penalty area.

And the midfielder scored a classy left-foot finish despite being under significant pressure with just four minutes left.