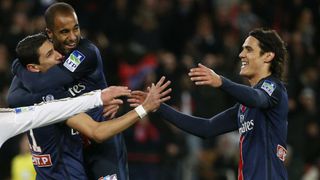 PSG led from the 17th minute at the Parc des Princes thanks to Adrien Rabiot's first domestic goal of the campaign, the midfielder poking home following a goal-mouth scramble, despite the ball appearing to have gone out of play.

However, substitute Moura had the final say with his seventh strike of the season in all competitions, played in by Angel Di Maria to cap off a sweeping move and extend the league leaders' winning streak to seven matches.

Meanwhile, Martin Braithwaite's goal in the ninth minute of extra-time helped Toulouse into the final four, courtesy of a 2-1 win over Marseille.

Wissam Ben Yedder fired the home side in front in the 25th minute before Georges N'Koudou levelled for Marseille just two minutes later. Braithwaite netted in the 99th minute, however, to secure safe passage for Toulouse.

Elsewhere, extra-time could not separate Guingamp and Lille, whose quarter-final finished goalless after 120 minutes. Lille won the subsequent penalty shoot-out 4-2.

Following the draw on Wednesday, PSG will take on Toulouse, while Lille are set to tackle Bordeaux.