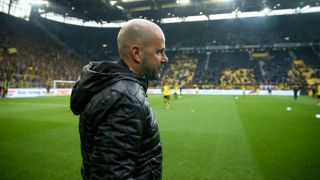 Peter Bosz snapped when asked if he believes he has a future as Borussia Dortmund coach and insisted he has endured worse pressure in relegation battles.

After an initially promising start to life at Signal Iduna Park, Bosz has seen his team drop from top spot to fifth and they are on a run of six Bundesliga matches without victory.

The most recent of those came in the Revierderby against bitter rivals Schalke last weekend, with Dortmund astonishingly squandering a 4-0 lead in the second half.

That defeat has seen the scrutiny increase and Bosz reportedly has one match to save his position, with a trip to Bayer Leverkusen – a place below in sixth – up next on Saturday.

And Bosz was asked at his pre-match news conference whether he has belief about a future with the club, a question he was not impressed by.

"By asking the question you've already answered it. Of course I believe in my future. We have to win, that's what I think is the most important thing now.

"I can't be distracted by that [speculation] now. I am used to it, I know what can happen.

"I would have liked things to be different, but it [talk of his future] does not help. It's only a distraction. I have to concentrate on my work."

The Dutchman also suggested the pressure is not as bad as fighting relegation at smaller clubs when the jobs of more than just the coach are at stake.

"I coached smaller clubs," he added. "If you fight against relegation, that's a worse pressure than what I feel now, because it was about jobs of people in the club."