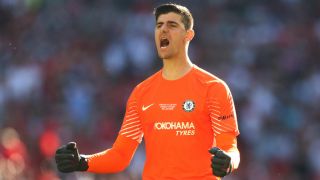 The former Atletico Madrid man has at times been questioned this season and was particularly criticised for his poor performance in the second leg of the Champions last-16 tie against Barcelona.

But having added to a trophy cabinet already containing two Premier League titles, Courtois was delighted to end the club's difficult campaign on a high.

"I think this season has been long, ups and downs. I've had good and bad words thrown at me after the Barcelona game," he told the BBC.

"To come back, play strong and win the FA Cup is amazing.

"I think it has been a long season for us, especially with pressure and speculation about everything.

"[Manchester] City were amazing this season, we couldn't do anything about that but we couldn't make the top four. To finish the season with a trophy is amazing."

Germany defender Antonio Rudiger likewise revelled in the victory to help seal his first silverware since joining the Blues from Roma.

The 25-year-old, who could feature at the upcoming World Cup, felt the players had done their part in upholding the club's reputation.

"Chelsea is about winning titles. Even though we had a bad season we still won a trophy," Rudiger said.

"For me, it is very nice to win a trophy in my first season."